By now, Argunet belongs to the senior citizens of the software realm. While it has grown quiet around this blog, behind the scenes, we were busy experimenting with a different technological approach to argument mapping. The result is a completely new software tool that we are very excited about. This post introduces Argdown to the Argunet community and explains why it has become our new tool of choice.

Argunet - a brief look back

We (Gregor Betz, Helen Bohse, Sebastian Cacean, David Schneider, and myself) started working on Argunet back in 2006 and published the first version in 2007 (with funding from the Free University Berlin). Over the years it has been downloaded more than 50.000 times, which is a lot, given the small number of argument mapping enthusiasts and the limited publicity of the software.

But first and foremost, we developed Argunet because we needed such a tool in our own work. And overall it did its job well! We have used it for many different purposes, be it in philosophy seminars, in research projects, for reconstructing huge debates, or for the moderation of live events.

Over time, however, three problems emerged. By design and through the technology used, Argunet is a “monolithic” application:

At some point we had to decide if we should rather invest a huge effort into practically rewriting Argunet, or if it made more sense to completely rethink our approach and start anew. We decided to do the latter.

What will happen with Argunet?

As a result of this decision, we currently do not plan to release any new Argunet versions.

This site will remain online and you can still download and use Argunet. If you have installation problems, take a look at the questions asked in the google group or post a new question. We will still try to answer your questions as best as we can.

We are considering, however, to provide additional tools (possibly Argunet Export Plugins) that allow you to save your existing Argunet debates as Argdown files. (If you want to support us in doing so, please get in touch!)

Around 2012 I started experimenting with combining argument mapping with real-time chat and forum applications. I needed an intuitive way how non-expert users could “augment” their text messages so that it software could extract and visualize the argumentative structure of their discussions. My idea was to define a syntax for text messages that was as easy to use as writing a Twitter message. The inspiration for this syntax was Markdown, so I simply called the new syntax “Argdown”.

While I ultimately abandoned the prototype in pursuit of other projects, Argdown was so much fun to use that we (by now the DebateLab Karlsruhe) finally decided to develop it into a free and open software tool that was expressive enough to let experts logically reconstruct complex argumentation. I released the first version in 2017 and internally we started using it more and more, until it completely replaced Argunet in our work. This week I finally released version 1.0.0 together with an extensive documentation. Argdown is now ready to be used by anyone interested in argument mapping.

Argdown itself is not a software, but a syntax. It is a light-weight markup language that is easy to read and write for humans and for computers alike (to borrow a slogan from Markdown). That means that it consists of a set of simple rules how to format text in a text file. By following these rules you can write an Argdown file in any text editor you like.

If you have no experience with markup languages like Markdown, Wikitext or HTML, using a text editor and a markup language to create argument maps can seem daunting and unintuitive. But in fact it is much easier than you might think and has many advantages:

Give it a try! Just read the three-minute introduction on the start page of the Argdown documentation. After that you are ready to play with Argdown in our browser sandbox.

(If you are a “visual thinker” you still might prefer to “draw” argument maps with Argunet, instead of “writing” them with Argdown. In the future we plan to add an Argdown-based map editor that will suit your needs. For now, just keep using Argunet.)

Software that reads and writes Argdown can be implemented in different languages and optimized for different contexts and users. I have written a parser (an Argdown reader) in JavaScript, so that it can run in the browser, as well as on any server or computer (using Node.js). Based on this parser, we have so far released three tools:

Our Argdown tool chain is modular at its core, and framework-agnostic. This means

What Argdown can do for you

Right now, Argdown has nearly reached “feature parity” with Argunet and surpasses it in many respects. In this section I will first list features that Argdown shares with Argunet. After that I will list the exciting new capabilities that make Argdown the superior software. Lastly, I will list the Argunet features that Argdown is not (yet) able to match.

Unlike in Argunet, in Argdown you can

Unlike in Argunet, in Argdown you can not

We already have a lot of ideas for new features and tools, but we will likely concentrate our work on

Argdown is still a young software. We think it is stable enough to be used in your work but it definitely needs more testing. If you should encounter any bugs or have ideas how to improve the software, visit the Github repository and post an issue. For general feedback or if you want to contribute to the project, simply write us a mail. We appreciate your help!

Alexander Kremling has compiled a vast argument map of Descartes Meditations, which he presented at the 9th conference of the German Association of Analytic Philosophy. 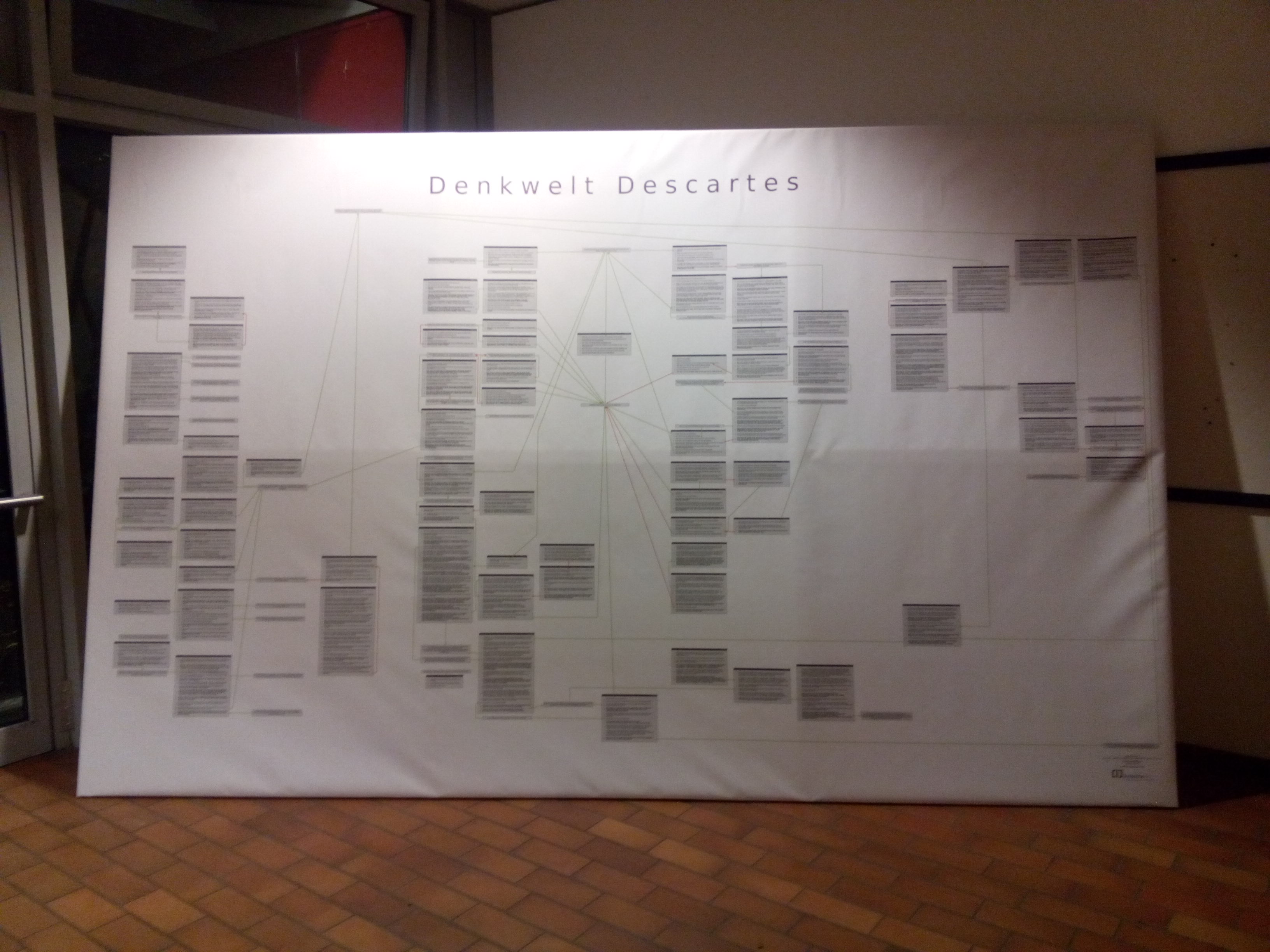 END_OF_DOCUMENT_TOKEN_TO_BE_REPLACED

How can argument maps be used for debate moderation? In this post three short “live reconstruction” case studies from 2007, 2011 and 2014 are presented. These cases show that the challenges of the approach are not so much of a technical but of a methodological nature. Even if the technology works perfectly it is difficult to get the conditions right so that the “live reconstruction” is more than just a nice gimmick.

END_OF_DOCUMENT_TOKEN_TO_BE_REPLACED

It’s not obvious how to present an argument map that consists in dozens of arguments. That’s because, in a talk, you want to comment both on the macro structure of the debate, providing an initial overview, as well as on individual arguments featured in the map.

END_OF_DOCUMENT_TOKEN_TO_BE_REPLACED

Do you ponder using argumentation software such as Argunet, but have not taken a course in argumentation theory or logic yet? Or do you just want to refresh you argument analysis skills? There’s plenty of learning material on the web that helps you to improve you critical thinking skills. This post features and comments on three free online courses.

END_OF_DOCUMENT_TOKEN_TO_BE_REPLACED

Linked, convergent and serial argumentation are basic notions of argument structure in Critical Thinking and Informal Logic. This post describes how these argument patterns translate into Argunet argument maps.

END_OF_DOCUMENT_TOKEN_TO_BE_REPLACED

Argument mapping represents a powerful framework for providing policy advice. This post describes how Argunet has been used in a recent project on so-called climate engineering methods.

END_OF_DOCUMENT_TOKEN_TO_BE_REPLACED

This post reviews the following textbooks on critical thinking:

In a nutshell, my favourite is Bowell/Kemp [1], closely followed by Lau [5].

END_OF_DOCUMENT_TOKEN_TO_BE_REPLACED

Since October 2012, Ralf Grötker from Debattenprofis has been conducting a media experiment involving argument maps and swarm intelligence. In the so-called Faktencheck (Factcheck) series, Grötker sets up and moderates online forums on controversial issues (e.g., “boycott of textiles — helpful or not?”). Debattenprofis use argument maps to aggregate the discussions. In a recent article Grötker sums up his experience so far.

END_OF_DOCUMENT_TOKEN_TO_BE_REPLACED

We are a team of philosophers with expertise in reconstructing, analysing and teaching argumentation. Over the years we have developed a couple of tools to facilitate our work. At the Argunet blog, we share and discuss our experience so far.